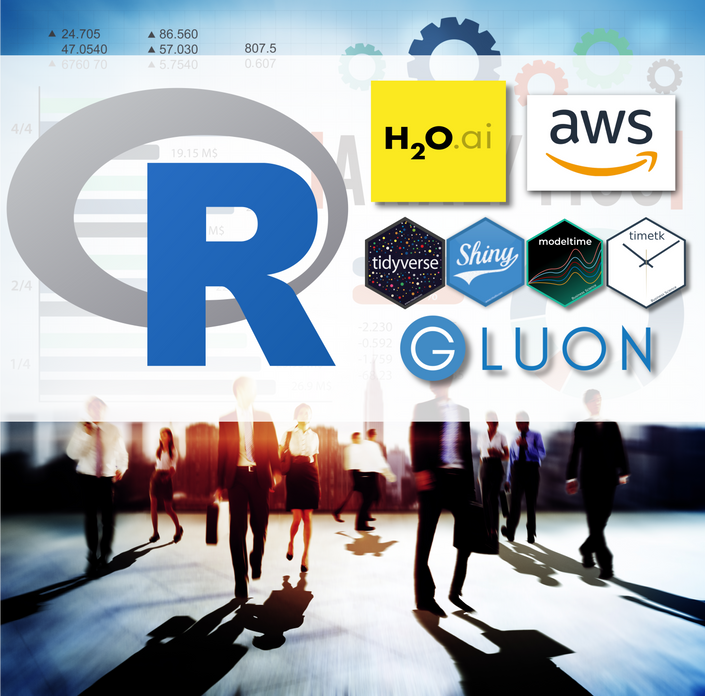 Enroll in Course
off original price!

Achieve your goals, accelerate your career, become the data scientist you were meant to be.

"Matt is an absolutely incredible teacher"

"His depth of knowledge and teaching style was what I needed"

"The culture Matt fosters helps students learn from each other"

"His courses are worth every penny"

The proof is in the results

These are the results that our 5-Course R-Track Students are achieving. Join us today. Career acceleration awaits.

"I just left my job of 5 years and accepted a new data science role finally earning 6-figures. I had multiple technical interviews and a case study that I largely got through because of Business Science Courses!" 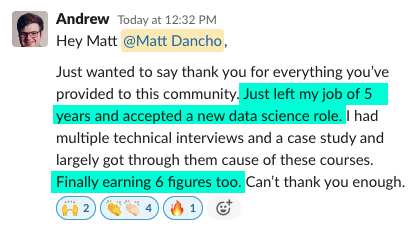 "In less than 6-months after starting my first Business Science University course, I had fully transitioned into a role as a lead data scientist and my life is better for it!"

"During my interview, I was able to do an in-depth analysis following Matt's Business Science Problem Framework and complete the project with Rmarkdown. The hiring manager fast-tracked an offer."

"I just accepted a Data Analysis Associate Position that was on the career page of your Slack. I nearly doubled my salary. I'm so happy to start this position." 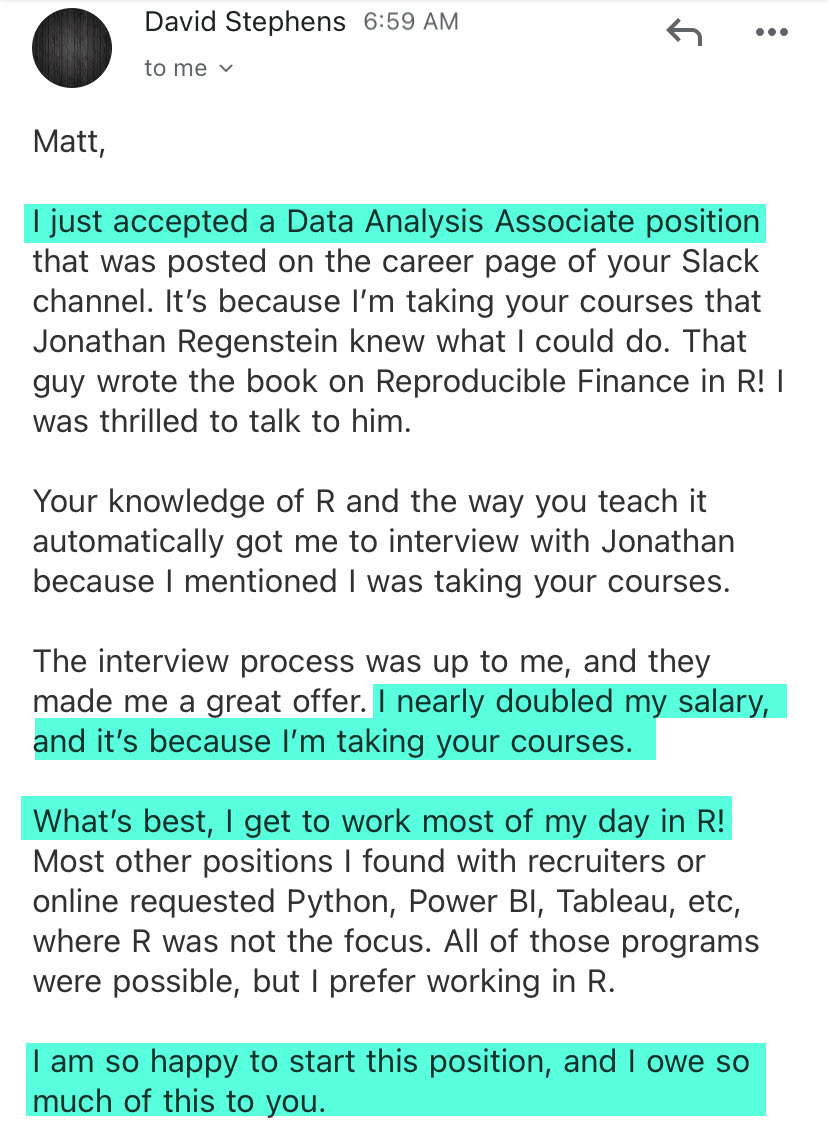 "I accepted a new job yesterday in the advanced modeling group in insurance pricing. Oh and a 20% raise."

"After five years of struggling to find the right opportunity, I now have two job offers. I can honestly say that the material learned in your courses has paid off."

"Because of all the R courses Matt Dancho has provided, I landed my first Data Scientist role. Setting up shiny dashboards in AWS was extremely helpful during my interview."

Masatake landed a job at a prestigious consulting firm.

"Without Data Science for Business Part 2, I would have never attempted to pay attention to business/financial impacts. Matt's instruction turned me into a more advanced data scientist and helped me find a new career opportunity." 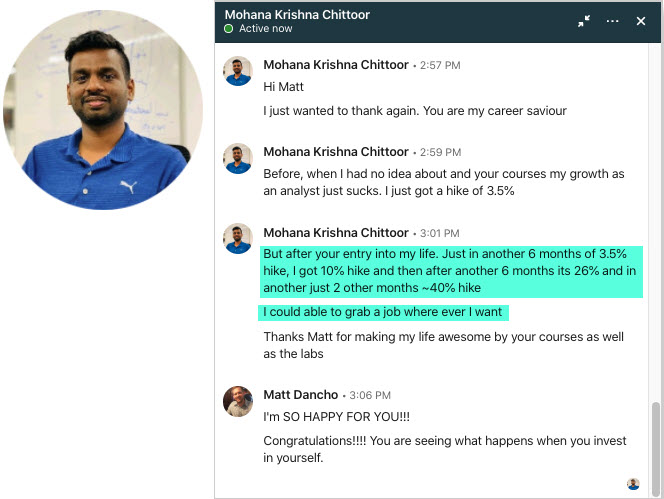 "I'm thankful for the great Shiny Developer and Shiny Dashboard courses. I was able to take results from a project to my bosses in an internal meeting in an interactive way."

"I completed Shiny Web Apps Part 1. For my final challenge, I created an app for exploring manufacturing process scrap." 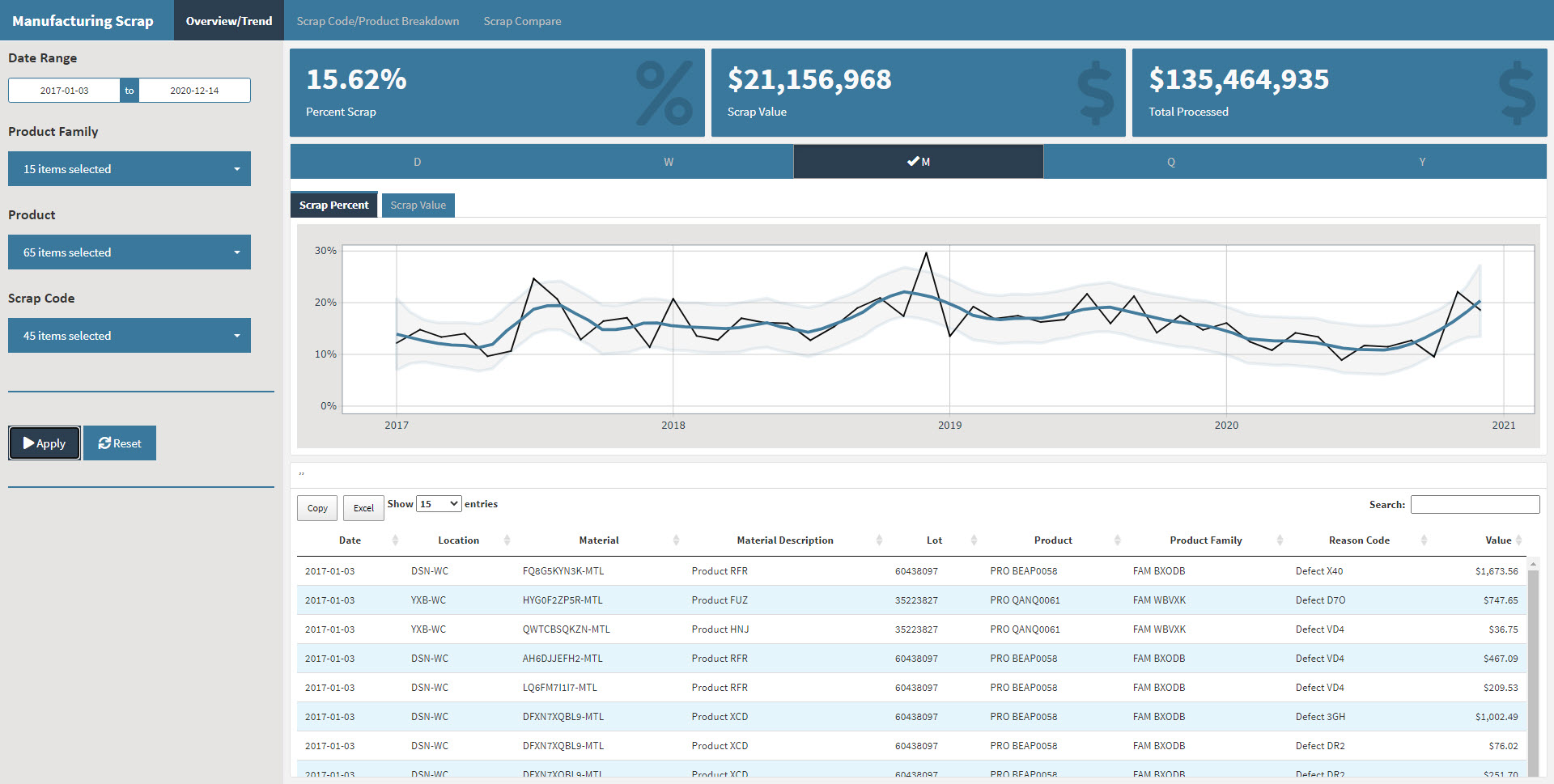 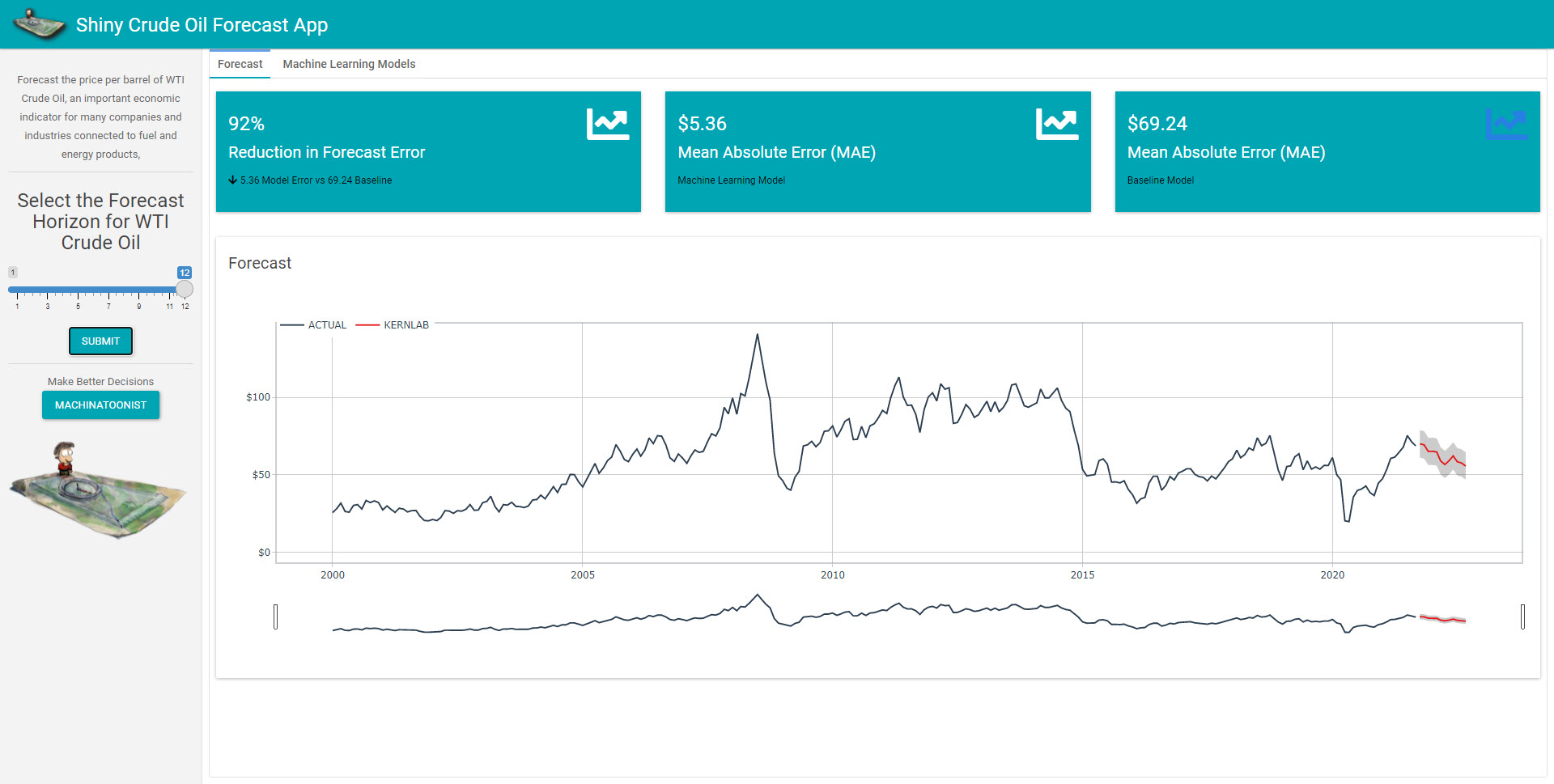 "I'm still early into Shiny Web Apps Part 1, but I was able to put together a 'Gapminder'-inspired shiny dashboard examining medals won at the Tokyo 2020 Olympics." 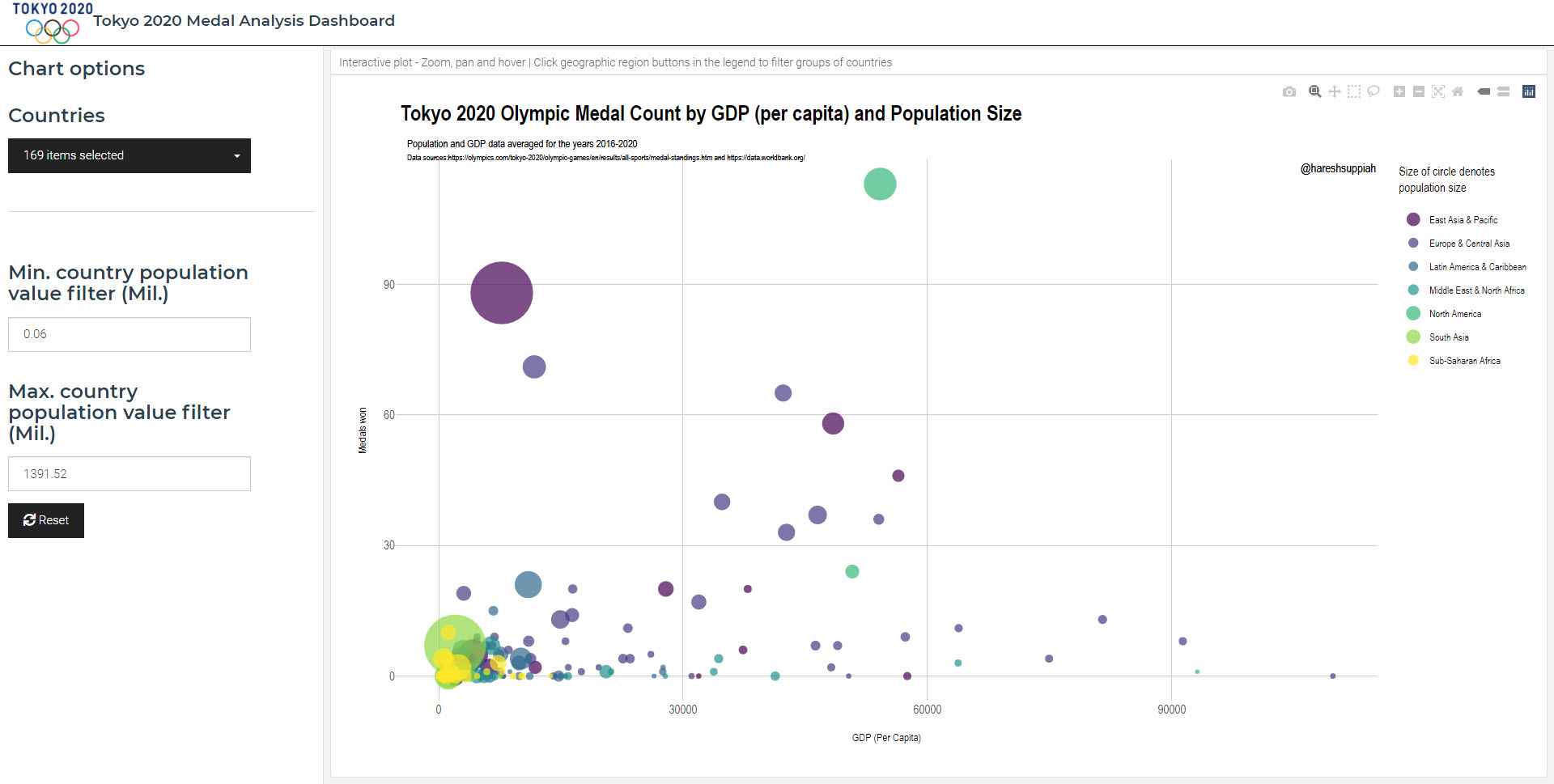 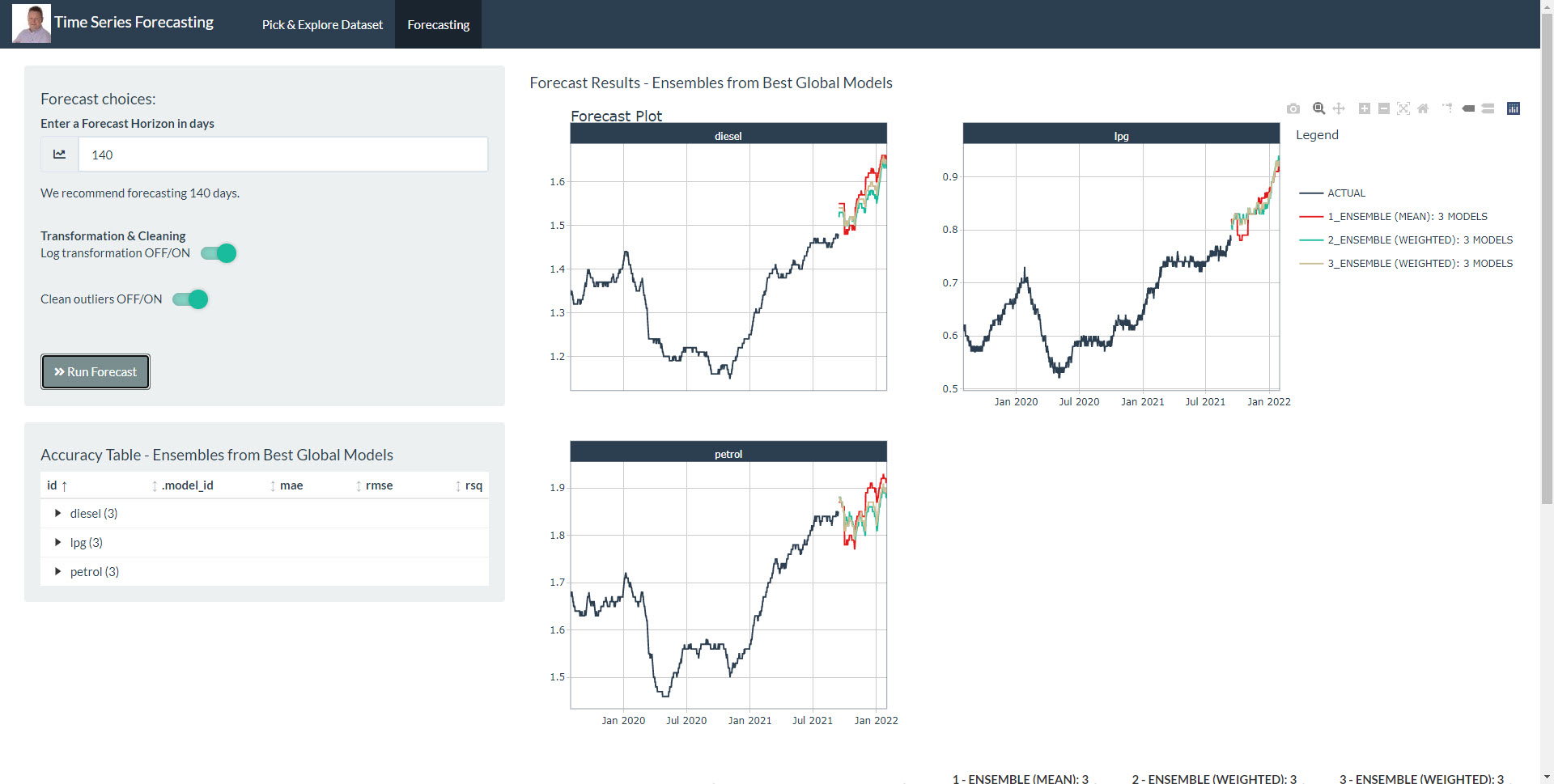 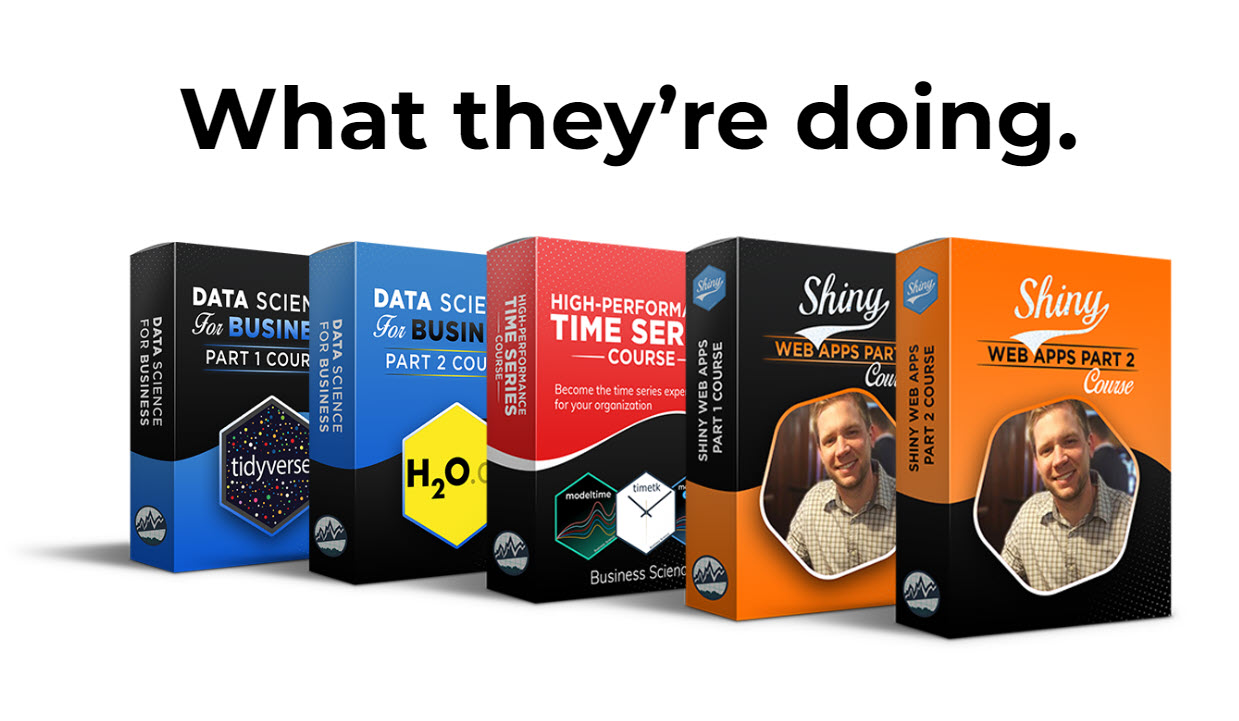 The 5-Course R-Track is like completing years of university education but actually getting skills that organizations need right now (no fluff) and you can apply your new skills immediately as you make progress in the courses. Here's what's included.

Learn from an integrated system of 5-courses that are streamlined, integrated, and comprehensive. 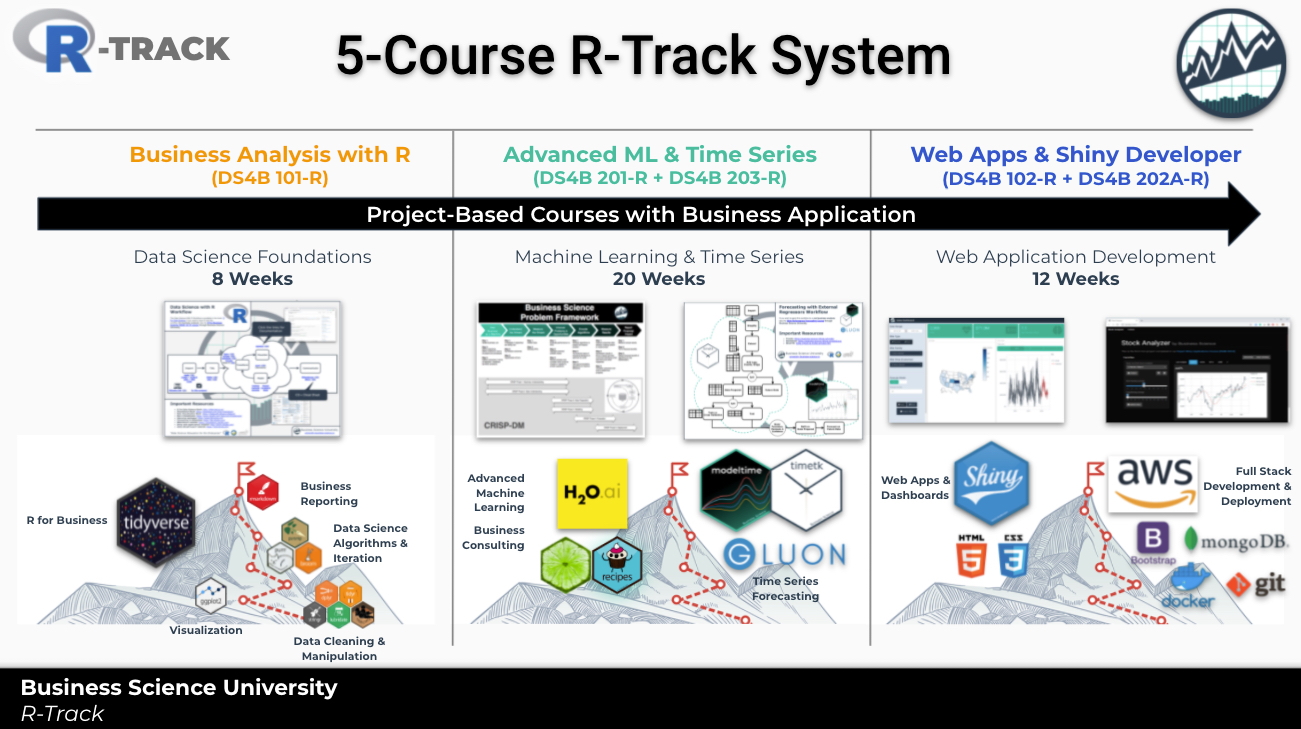 Complete 8-projects along the way. We've divided the projects to be evenly split between predictive analytics (4) and shiny web applications (4). 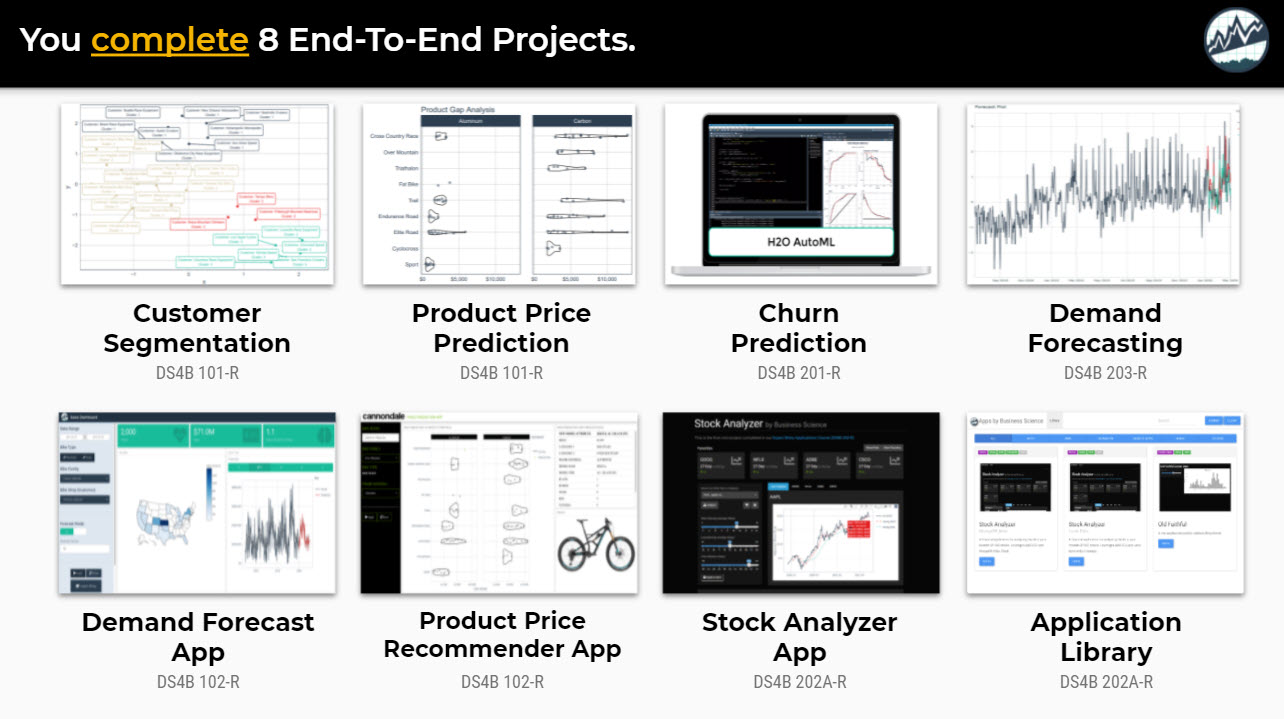 Skyrocket your career in 5-courses (Equivalent to 250+ MOOCs) 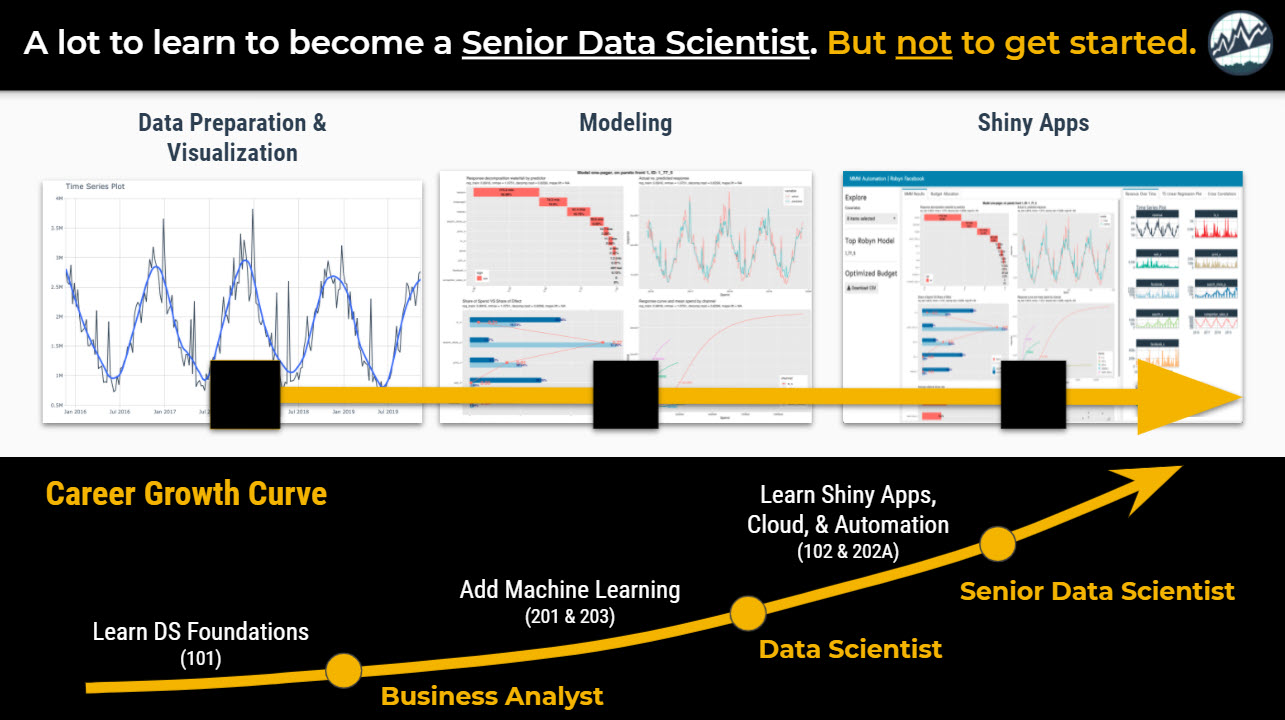 You have full access to Matt and his community of 2000+ dedicated students learning data science. Master data science with a community that helps each other at the speed of learning. 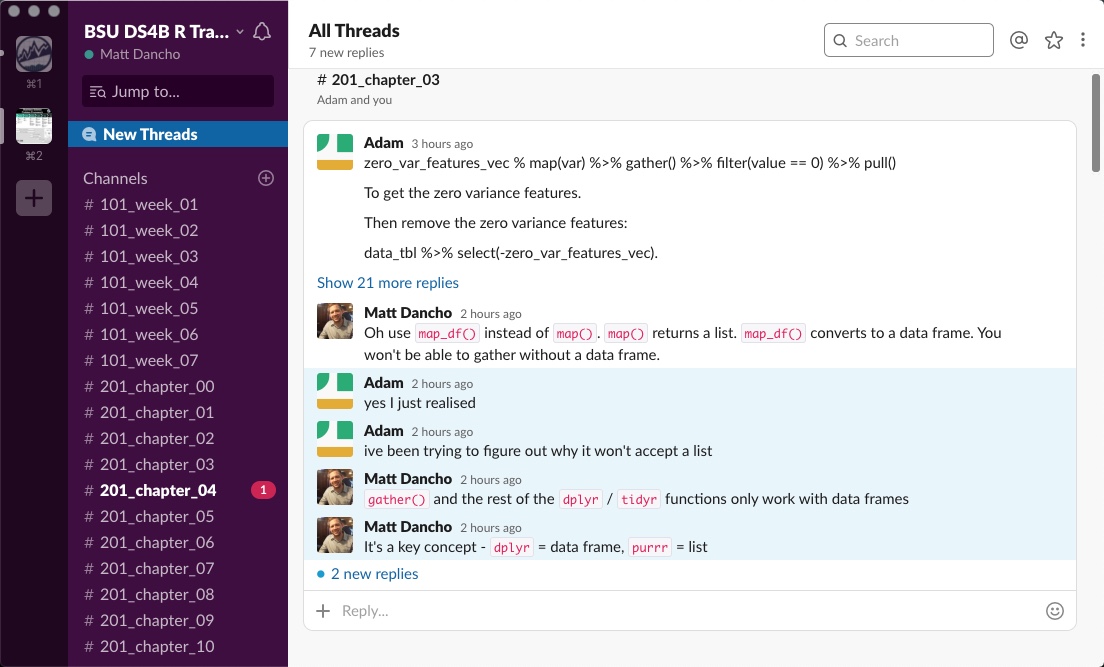 Upon full purchase, you own the courses for lifetime. This means any upgrades and additions we make to the course, you get the course upgrades automatically. It's as simple as that. 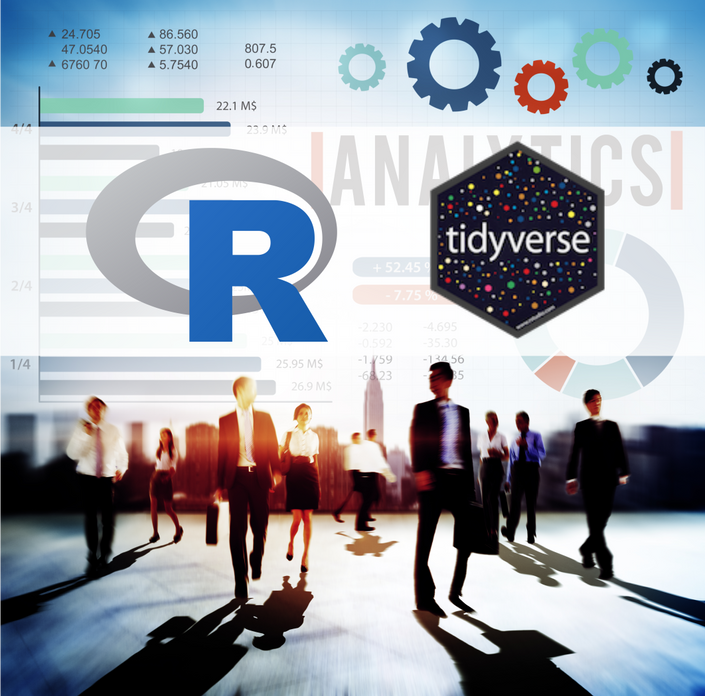 Data Science for Business Part 1
Your Data Science Journey Starts Now! Learn the fundamentals of data science for business with the tidyverse. 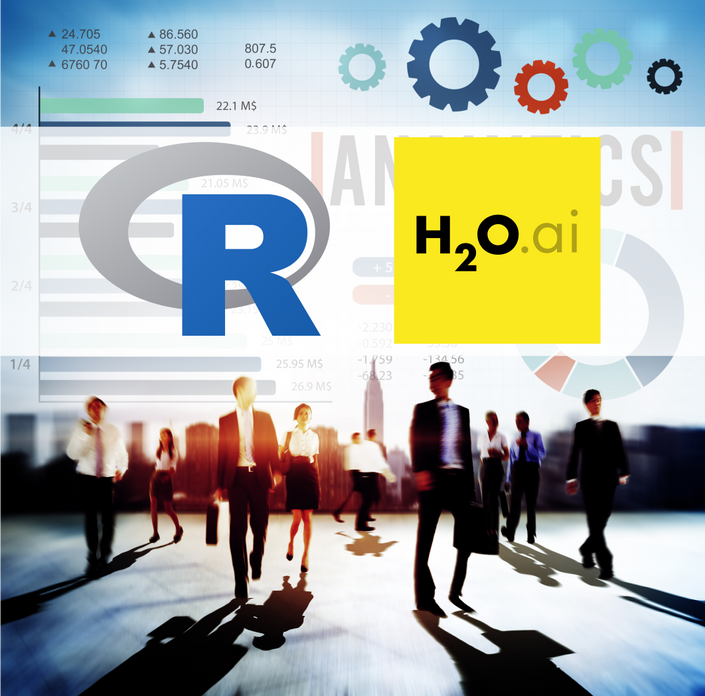 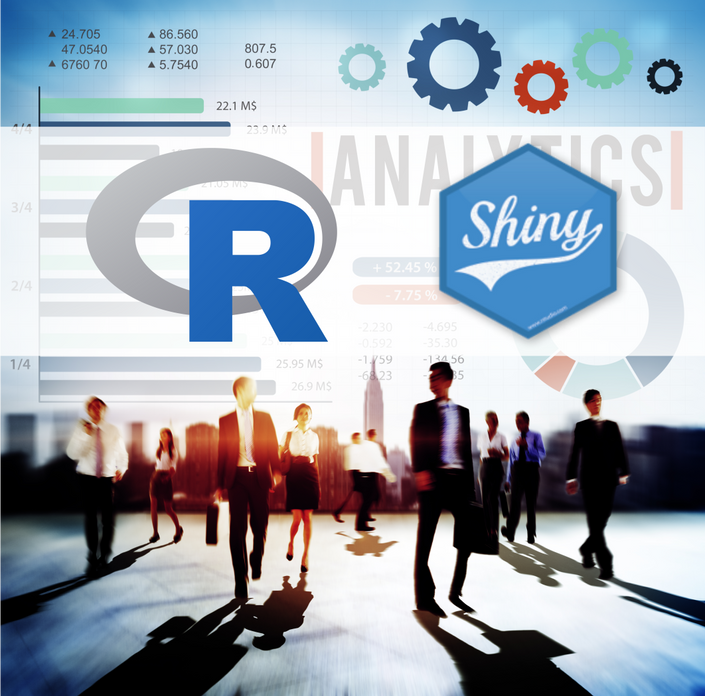 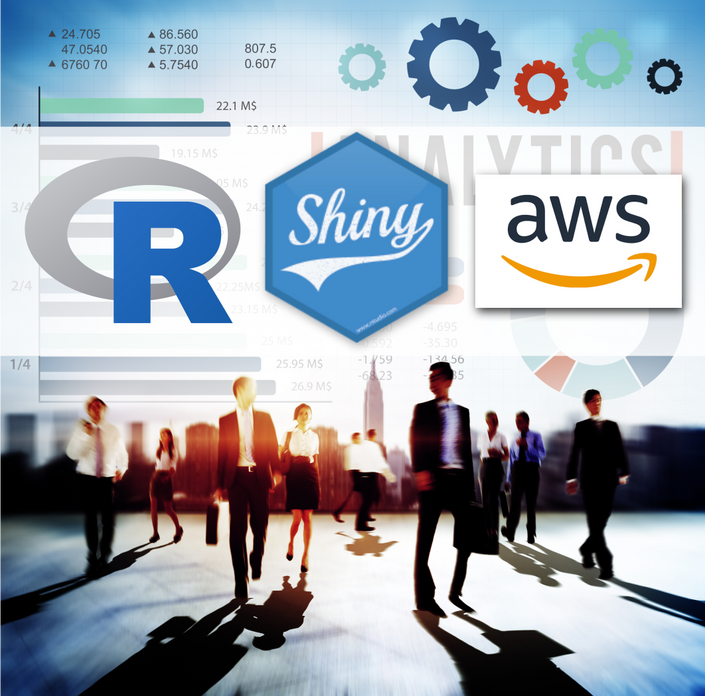 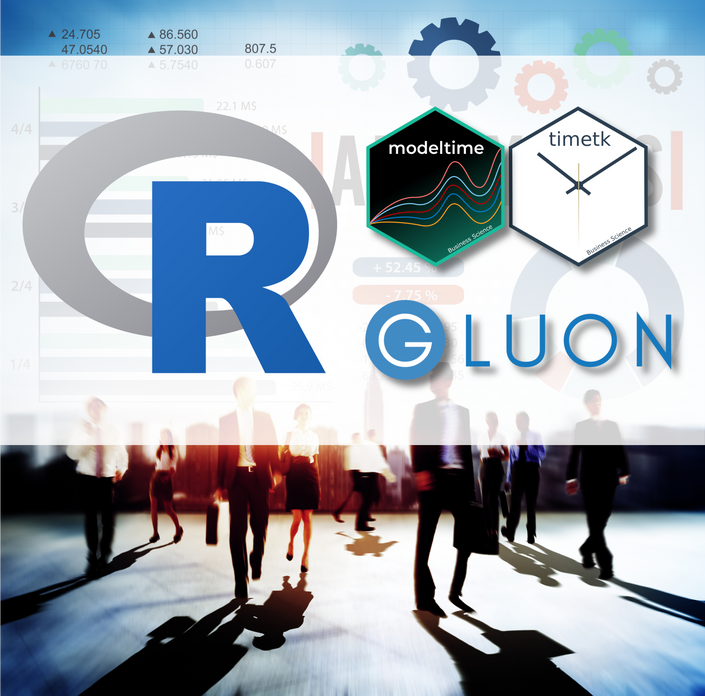 A 7-week curriculum that methodically teaches the foundations of data science using R & tidyverse. You will learn:

Data Science For Business with R

A 10-week curriculum that incorporates R & H2O AutoML to use machine learning within a business problem solving framework called the BSPF. You will learn:

Here's an example of a predictive web application that you build in this course.

Expert Shiny Developer with AWS Course is an amazing course designed to teach Data Scientists and Programmers how to develop applications and deploy into production! You'll undergo a complete transformation learning the most in-demand skills that organizations need right now. Time to accelerate your career!

Discover What's Inside the Expert Shiny Developer with AWS Course 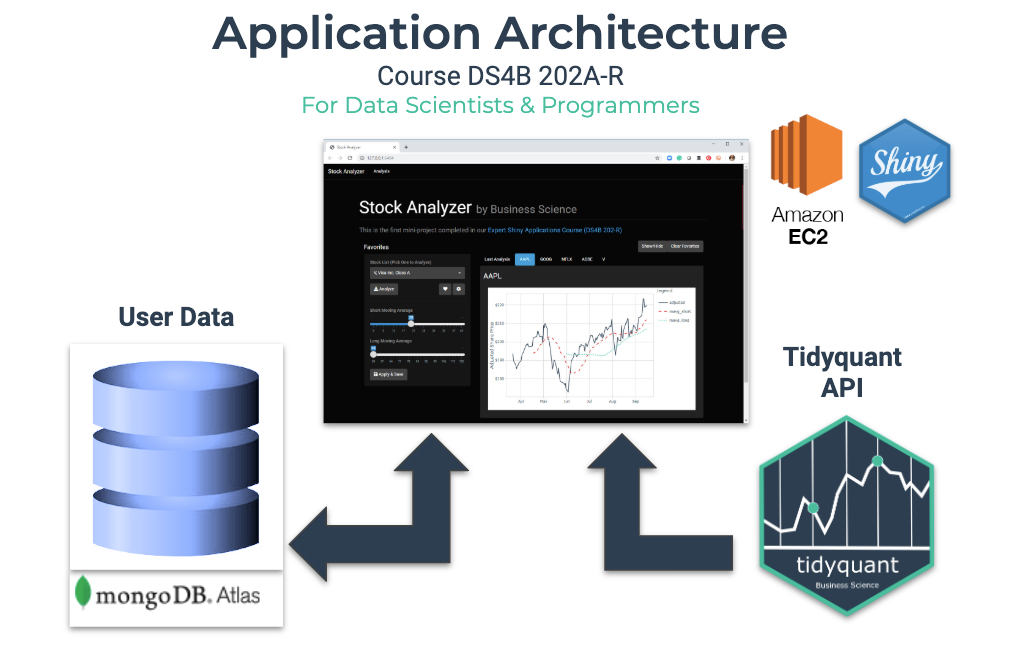 Founder of Business Science and general business & finance guru, He has worked with many clients from Fortune 500 to high-octane startups! Matt loves educating data scientists on how to apply powerful tools within their organization to yield ROI. Matt doesn't rest until he gets results (literally, he doesn't sleep so don't be suprised if he responds to your email at 4AM)!

When does the course start and finish?
The course starts now and never ends! It is a completely self-paced online course - you decide when you start and when you finish.
How long do I have access to the course?
How does lifetime access sound? After enrolling, you have unlimited access to this course for as long as you like - across any and all devices you own.
What if I am unhappy with the course?
We would never want you to be unhappy! If you are unsatisfied with your purchase, contact us in the first 30 days and we will give you a full refund.